About occupation regime in the USA 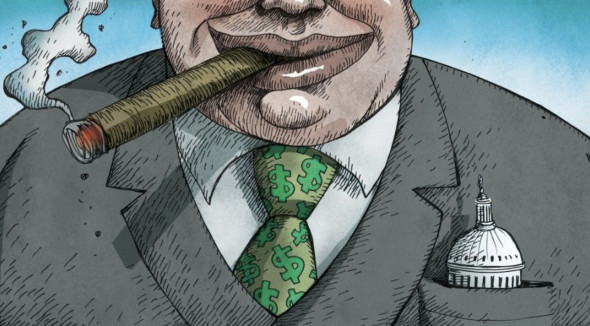 Multiple political scandals in the USA cause astonishment: is it impossible to finally determine the country’s interests and to conquer passions which have already begun undermining the USA influence in the world? Things look even stranger if we add to that Trump’s aggressive attacks towards the institutions having ensured the country’s world hegemony for the last 75 years. If Trump damnifies his country’s economy, why does such a huge part of population support him?

An attempt to give the shortest possible answer to this question looks the following: until recently, the USA have been, in a sense, a country under occupation and Trump has been making attempts to eliminate that occupation. The USA interests may be interpreted in many different ways and Trump has just chosen the one independent of the «occupation regime» leaders.

And now I’ll try to decode the thesis which looks quite ferocious at first sight. Let’s look at things in sequence. In 1944 (upon Bretton Woods agreements) the USA share in the world economy was over 50% both in production and consumption. Today their production share is less than 20% (it’s hard to be more precise because GDP is a rather wide-range accounting criterion, as well as the purchasing power parity is a quite subjective criterion, its absence making it impossible to compare economies of different countries), while consumption is over 30%. In other words, the country lives on credit.

In addition, today’s buying capacity of an average salary in the USA remains at the level of 1950s and the high consumption level is induced by stimulation of demand which exceeds really disposable income by 30% (in 1929 this gap was about 15%). This margin is secured by growth of debt, both private (which is lower compared to 2008, but is still up to 100% of the annual income, which gravely exceeds the historically formed rate of 60%) and state along with the corporate one. Well, the debt servicing is not very expensive, but under current interest rates there is no normal reproduction of capital, and the economy is stagnating.

Such situation may be explained by the fact that emission has played an important role in the USA economic growth since 1944. In the initial stage, from 1944 till the beginning of the 1970s, the emission was aimed at expansion of the dollar turnover in the world. Then since 1981, after the 70s’ slump, the emitted money was assigned to direct credit stimulation of private demand. This process is described in more detail in my book «Reminiscences about future». What’s most important now, is that this process has radically restructured the whole world’s economic mechanism.

Its simplified description falls into the following pattern. The USA’s FRS (being a part of Bretton Woods mechanism with its transnational structures such as IMF and WTO) emits dollars which are invested into different countries of the world through the system of Bretton Woods transnational banks to set various manufacturing facilities (which banks were established in the 1940-50s to implement the model of expansion of the world dollar turnover, while there was a ban for those banks to set affiliates in the USA then). Those manufactures, in turn, sell their products to developed countries at low prices (compared to prices of the same goods produced in developed countries, in the USA in the first place) which raises the level of living. And closure of local production facilities is compensated by redistribution of the emission profit along with demand stimulation.

The question is, why doesn’t this scheme satisfy Trump and a significant part of the USA population? The matter is, its effectiveness has been weakening, and the world financial elite (only partially associating themselves with the USA) decided to raise money value to regain return on capital. (Nominally, in the USA it has positive yield but it is lower than actual inflation; in Germany, for instance, it is even nominally unprofitable). But taking into consideration the accumulated debt, it is clear that the USA population won’t cope up with such increase in rates.

Of course, such peculiarities were not a matter of interest for the financial elite. And as the USA state apparatus actually fell under their control since 1974 (upon Nixon’s resignation), they aggressively started putting this plan into effect (this particular process I qualified as «occupational» in the beginning). In fact, in the first stage an attempt to withdraw the world currency emission mechanism from under the USA national control was made in order to minimize expenses. In other words, it was an attempt to finalize the Bretton Woods world finance reform. But then diamond cut diamond, and after the «Strauss-Kahn case» it became clear the USA wouldn’t be allowed to emit the world currency.

Further on, the elite groups opposing the financiers’ monopoly (including appropriation of profits from the above Bretton Woods system) grew stronger in that country (please note, that within 75 years the financiers have increased their share in redistribution of assets from 5% to over 50%). Acceleration of crisis processes in the economy had just increased the tendency, and upon the results of the off-set elections in 2014 it became clear that culmination is to come. Thus, Trump won the election in 2016.

Trump’s main thesis supported by the American population was that Bretton Woods model (advantageous for other countries, China and Germany in the first place) had to be abolished, and the country should return to the old model based on domestic production. The implication (as saying it out loud was too scary) was that it would be necessary to reject the financiers’ domination concept in determining any economic strategies in the USA.

Why is this situation inacceptable for financiers? The reason is obvious: it requires their several-fold profit (relative portion of it) squeeze, which will result in the proportional decline of influence among the elite. In other words, a lot of major players will become ordinary middlebrows. Just imagine: heads of modern Russian banks are offered positions of book-keepers at enterprises! They will frantically resist!

This situation raises a great hue and cry among the Washington establishment. Within over 40 years since 1974 they have already learned that making a career is possible only through «friendship» with financiers. Participation in any campaign against them guarantees career disaster. Not without reason, Trump is now pulling hick investigators not yet spoiled by Washington bureaucrats to Biden and Clinton cases. But in any case, the conflict is going to get increased as the notorious bureaucrats understand (and Trump’s behavior gives them additional arguments) that they’ll have to resign as soon as Trump finally destroys Bretton Woods model. And nobody wants to leave…

In fact, 2020 election is the key point in the USA history. If Trump wins, he’ll destroy the financial occupation of the USA and start building a new country with all the resources assigned to the nation’s well-being and not in the financiers’ interests. If he loses, the financiers will assign all the resources to save the Bretton Woods system, then American people would seek sympathy: there could be starvation deaths as in the early 30s, or Ickes’s «gulag» will seem just a taste of what’s to come. The financiers won’t reflect long before drowning the country in blood just to keep their occupation safe and remain in control of the world money emission center. Undoubtedly, they won’t manage (worldwide «de-dollarization» is inevitable), however they could start a nuclear war.

All in all, this domestic fight in the USA affects the worldwide situation. However, it should be understood that this is the fight between various American, or, to be more precise, national American and transnational financial, elites. That’s why it’s incorrect to speak about the «USA policy» today. We should speak separately about the «USA policy» in the financiers’ interests and the «USA policy» in the national elite’s interests. There have been only the former until recently, and now both are competing simultaneously. It has to be determined yet what’s going to happen after November, 2020. But the latter are more likely to win. At least, let’s hope they will.

To conclude, let me note that any analysis of the USA policy and/or politics and of a certain politician is impossible today unless we separate those two abovementioned groups, their interests and goals which differ fundamentally.