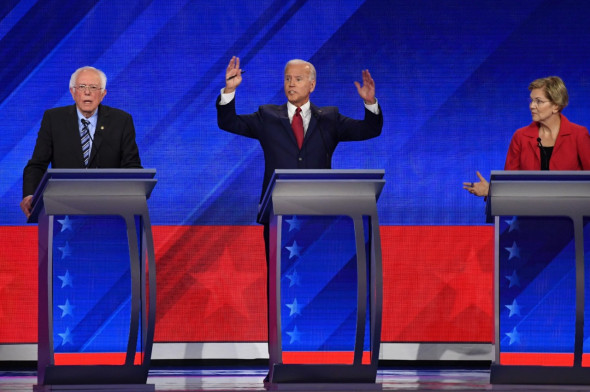 Seminar, dedicated to geopolitics, couldn’t avoid follow-up backstage talks about state of affairs in major world countries. One of those countries is the USA. In particular, everyone has been interested in possible tactics of the liberals in their fight against Trump when this fight comes into acute phase, and if they have any chance to succeed. In course of discussion we came to a certain scenario presented herein for discussion.

The first reason of ours is, the situation with the impeachment has been hyped with no real aim to reach the final result. Democrats aren’t stupid and they understand that there is no real chance to do it. In our opinion, this has been done to make people, as many of them as possible, think that Trump is not legitimate. If this idea becomes popular enough, it would theoretically let them start the procedure similar to one concerned Venezuela President, N. Maduro.

Next, the key task is to make Trump do things which will let the above opinion become common and dominating. The best thing would be, if they make him break up a peaceful demonstration with maximum possible lethal outcome, and then spread it around the country and the whole world. In fact, this would mean the inland «orange» scenario in the USA. Upon that the liberal (i.e. controlled by transnational banks, the elite of the «Western» global project) group of the USA elite would try to impeach him.

Roughly speaking, upon some Trump’s actions (or, imitations of such actions, as, remember, mass killings in «Maidan» were conducted by its organizers, not by the legitimate President Yanukovych’s people), Speaker of the House of Representatives, Nancy Pelosi, Trump’s active opponent, should have called Vice-President Pence to suggest that he take the power because «President Trump has actually betrayed people’s confidence with his actions», or something like that.

This message should be delivered in front of cameras and microphones, and in case Pence refuses or hesitates, she should declare herself taking power in complete accordance with the Constitution. Trump would be unable to contradict this, as his influence on mass media (and TV channels, in the first place) is quite limited, and, theoretically, could be restricted even more. In other words, here we actually speak about coup d’etat.

The question is, how is it possible in such situation to send Trump away from the White House and restrict his influence on media? To do this, mass demonstrations could be staged involving hundreds of thousands of people who would demand, based on the Second Amendment to the Constitution (providing for the people’s right for armed revolt in case the Government violates the Constitution and the rights of the American citizens), Trump’s impeachment as a person no longer serving people’s interests and usurping power. Ideally, a couple of millions of people should be gathered in front of the White House, but I think a million would do. And they should start the storm.

There will be a simple alternative then: either the White House gives in without struggle, or it is fought for, with a lot of victims guaranteed. But even if it isn’t fought for, the orchestrators of the «performance» will provide the quantity. This scenario was well rehearsed in Kiev and other places. In other words, Trump should leave the White House by the time the crowd starts gathering.

But if the White House is empty, what will prevent Pelosi from entering it triumphally? Moreover, the ex-president Obama’s security is most likely to help her (remember, Trump waived Secret Service upon winning the elections until he got a chance to change all its chief officers). Trump possesses codes from some military systems, but Pelosi needs neither nuclear weapons nor control over the military forces. She just needs to have an opportunity to hold a press-conference in the Oval Office and take the presidential oath.

However, for the latter action she would require presence of Chief Justice of the US Supreme Court. But he could suddenly pass away (he isn’t guarded as effectively as the President) or wouldn’t be found, etc. But if the oath is taken in public and some foreign countries back up the new «president» (this scenario was rehearsed on Maduro), all this will look even more convincing.

Another question is how to gather people. It’s also rather simple. At a propitious moment (e.g. on the 4th of November) huge demonstrations would gather in liberal cities such as San-Francisco, Los-Angeles, Boston, New York, Washington, etc. Moreover, people’s columns would march to the White House from the cities located close to Washington. There are many techniques and specialists to agitate the crowd, I won’t list them here.

Trump would have to deal with this. If he didn’t let them in, different incidents (even with multiple victims) would start happening, which would be widely spread by mass media «disinformers» mostly controlled by Trump’s adversaries. Besides, if there were victims, they could also find «Putin’s or Erdogan’s agents» there, the techniques have been rehearsed, for instance, in Hong-Kong.

If Trump stayed in the White House, there would be a storm. It’s impossible to avoid human losses in a million crowd (with specially prepared provokers among them). He would have no chance to seem more or less uninvolved if he was inside the White House. If he left, his opponents would be left free to act according to the above scenario.

Let’s note, that Trump would highly unlikely have time to stage the counter-demonstrations, as his allies still don’t believe that their liberal adversaries could sacrifice the country. But they can, because their main aim is to find a guaranteed secure place on Earth. The USA and Trump won’t do, Russia and Putin either, China is even worse. There is only European Union left. And only under condition that NATO infrastructure would fall under control of Brussels, and Trump (or his successor) wouldn’t dictate terms. What has to be done for that?

Right, either the power in Washington has to be seized, or the USA, as a factor, should be pushed away. And if the above scenario or anything like that happened, there would be two presidents in the USA. Each of them would mobilize the National Guard in the states with «tamed» governors, which would lead to a full-scale civil war, unless something bad happened to Trump, and Pelosi (or some other liberal) seized the power entirely.

Someone may consider such a scenario to be too cruel. But let’s realize, Democrats can’t present a decent alternative to Trump for now. Besides, the USA elite have been living in peace and harmony for too long, being sure – no public proceeding against them is possible. Thus, they were involved in questionable business. Look at our top public servants – they are also sure that no public proceeding against them is possible. But what if it is?

Just let’s envision, that Einstein’s or similar records turn up in Trump’s hands. Any conditions, under which there could be public denunciation, are inacceptable for those people, they cannot wait any longer, the risks are too high. If they decide to do anything (except slowly crawling to the cemetery covered with a sheet), this should be done now, before the New Year.

By the way, the described scenario is safe for its orchestrators. People would march to Washington and the White House without assistance, Trump would leave on his own and would or wouldn’t declare a state of emergency in the country. Pelosi would insist on her righteousness, as angered people would storm the White House in complete accordance with the American law, etc. Of course, if Trump wins, he’ll sort things out. But who says he’ll win and all the more, win quickly?

We’ve tried to write the most tough and bright scenario, simultaneously making an attempt to avoid improbabilities. I would suggest that it be given consideration and discussed, as we are close to the point when we cannot exclude the situation that makes such scenarios realistic, though not entirely possible, for now. But all in all, it’s time to discuss even them.